More Pics from the 'Siege of Acre'

I had loads more photos from our big Chrstmas game 'the Siege of Acre' so I thought I'd throw them onto the 'net!
Christian Archers preparing to fire! 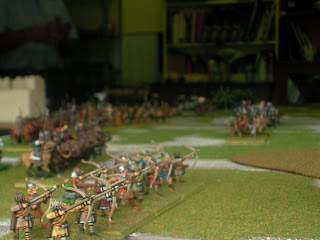 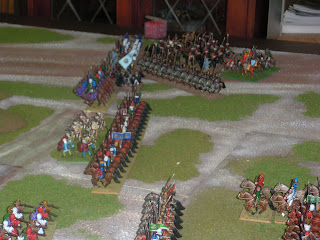 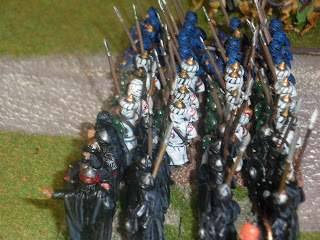 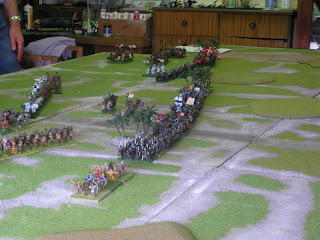 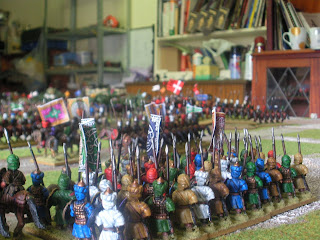 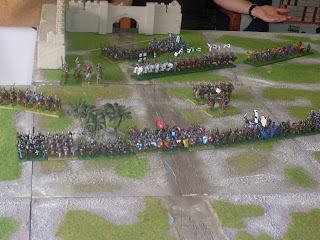 The end of the line: Turkish light cavalry skimish with the Christian infantry on the extreme end of the battle field. 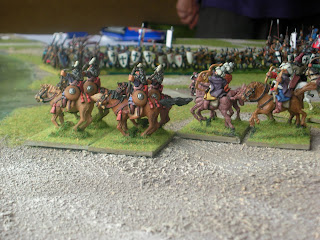 Crusader knights are about to cause some serious trouble to the Arab archers. 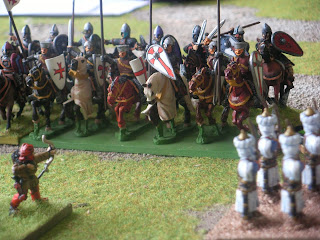 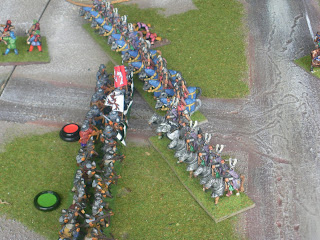 Posted by John at May 13, 2010 No comments:
Email ThisBlogThis!Share to TwitterShare to FacebookShare to Pinterest
Labels: Armati, Ayyubids, Later Crusaders

Well, here we go again! Another set of Horse and Musket rules that can be added to the growing collection on my shelf: Lasalles. A few weeks ago, Ralph and Richard ran through the streets shouting "Eureka!" clutching these rules and claimed to have discovered our groups 'holy grail'- a set of Horse amd Musket rules that we all like playing ( a tall order I must tell you!). Well I must admit I was a bit sceptical at first and at one of our usual Friday evening gatherings, this time at Nick's place I was given the command of some French Infantry and a small cavalry brigade. Well after three hours of play and a close fought game I was hooked!!! The rules have some unusual mechanisms and the game is not really an 'I go - you go" style of game. It is a lot more subtle. It plays well and can accommodate quite a few players. Now I just have to make some ammendments for my Marlburians!!!....but it seems most of the Band of Wargame Brothers are keen to start Armies...except Nick who already has so many that the foundations of his house are begining to sag...but he's damned happy that he has a set of rules that we all agree on!!!
Posted by John at May 13, 2010 No comments:
Email ThisBlogThis!Share to TwitterShare to FacebookShare to Pinterest

Our usual Christmas stoush brought together all the combined Norman/Crusader knights and foot sloggers that we could lay our hands on (Ralph's , Ross' and Richard's) to fight every Turkish spahi and Arab fellahin ( mine, Ross' and Nick's) that just happened to be lying around. There were six of us on the day and we were aiming to recreate the attempted relief of Acre by the armies of Saladin in 1191. Ralph took the command of the forces of Outremer as Guy de Lusignan, holding the right flank. Richard commanded the forces of Conrad de Montferrat in the center. Phil commanded the Holy Orders and other assorted knightly rabble on the left. Opposite him, commanding the Muslim right wing Nick led the hordes of Taqi al Din. The center was held by Ross who played the great man (Saladin) himself and I was given the Muslim left wing commanding the Egyptian troops of Asad ed-Din Shirkuh!
The Battle was a long drawn out affair with the Muslim forces launching initial attacks on the flanks but staying clear of the Christian center which had a lot of crossbows! On the Muslim right Taqi ed Din’s forces (Nick) substantially outnumbered those of the Grand Master of the Templars (Phil) who put up some stiff resistance. On the Muslim left the quick attack of the Egyptian Mamluks of Shirkuh(me) came to a grinding halt when they collided with Guy’s (Ralph) household troops. As the battle of attack and counter attack swirled on the flanks, wide ranging Muslim light cavalry began to harass the extreme end of the Christian line and then Saladin sent forward the main Muslim body in the center.
Under Armati each side has 'Key Units' and when a certain number of those are broken/destroyed then that side is defeated. The game went for the best part of 6 hours. There were over 500 cavalry and 260 infantry. It was a lot of fun and the game went down to the wire leaving Saladin the victor by a very narrow margin. However, our esteemed umpire and designer of the scenario decreed that due to the massive losses suffered by Saladin's forces, the Muslim forceas were unable to break Guy's grip on the city! In other words...it was an historical result! Nice one lads!

OVERVIEW OF THE BATTLE FIELD 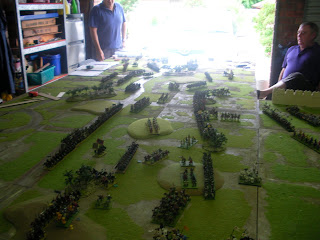 The Holy Orders Charge the Muslim forces in their usual hell for leather style! 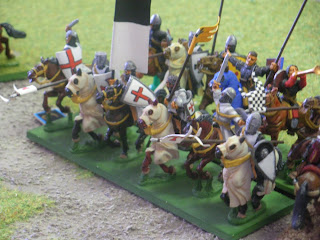 A View from the Saladin's lines. 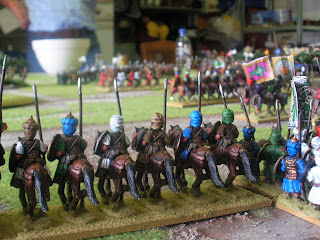 The Muslim Center and Right flank. 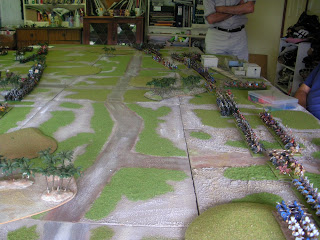 Infantry from the Christian center advance. 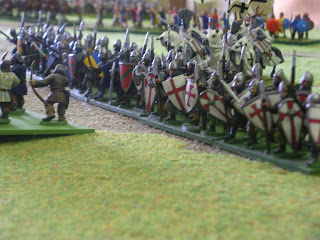 More Knights! I love these guys! 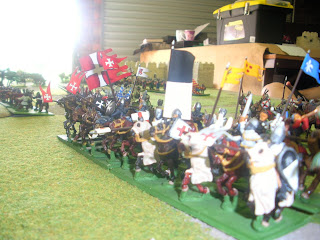 Close up of charging psychopaths! 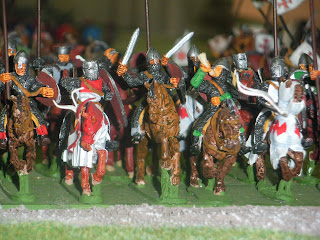 Dismounted knights and crossbowmen- the troops of Conrad de Montferrat 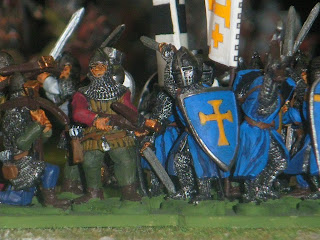