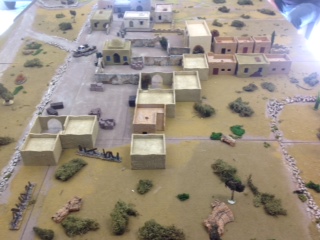 Spyros has built up a nice force of modern Diggers (Australian soldiers!) with Bush Masters and LAVs for our country's recent combat in Afghanistan. He originally touted the idea of using them for Force on Force......but as he had well over 60 figures it may not have been feasible....well not for my feeble mind! I would lose track of all the actions and reactions! So he suggested Bolt Action. Initially I was sceptical..but he found some amendments on the net (check some of the links on his blog - No Duff gamer). So we set about organising 'equal' forces ( a far cry from Force on Force !!). The Diggers were all classed as regular and we made majority of the Taliban forces as 'inexperienced' but the heavy weapons, commanders and technicals were all regular.  We tried not to fiddle too much with the rules, and although the game worked well and we had a great time, the casualty rate amongst the Spyros' forces would have been considered a major political disaster.
Aside from that, the lens of my camera had fingerprints on it....so the pictures didn't come out too clearly! No more eating greasy chips and taking photos!!


Click here to read this entry and see the pics;
Posted by John at July 19, 2015 4 comments:
Email ThisBlogThis!Share to TwitterShare to FacebookShare to Pinterest
Labels: Australians, Bolt Action, Taliban

Years ago I read a great book by Bernard B Fall called 'Hell in a very small place" about the siege of Dien Bien Phu. Well, I had always thought that I would love to game the French in Indochina against the Viet Minh.  You know how it is- in the dark recesses of our minds we're always dreaming up some new project that will be the biggest and best we've ever done with superlative terrain, beautiful figures...and the best rules ever written.
Well that's probably not going to happen but I can only dream!
When Red Star released their Indochina range I was certain that sooner or later I was going to spend some cash to add to the mountains of unpainted lead piling up in boxes under the stairs. Before I could do that, however,  I came across these little beauties on ebay....and I grabbed them!
Now I've got to build some terrain....and get some Viet Minh.
The photos don't really do the figures justice.  The first 11 are under fluoro lights..the others are in direct sunlight. I think taking the photos in bright sunlight may not highlight them to best effects. Maybe I need to get a better camera! 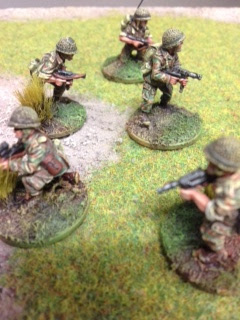