Glenshiel: The Fourth Battle of the Rebellion of the '15

The heralds have proclaimed it across the British Isles...the Rebellion is over. But it was very nearly a different story. Both armies had assembled near Glenshiel in the western Highlands and it was do or die for the Scots. But the high drama continued amongst the commands of both sides and there were some VERY surprising developments that left the Hanoverians angered and the Jacobites stunned and feeling betrayed..... 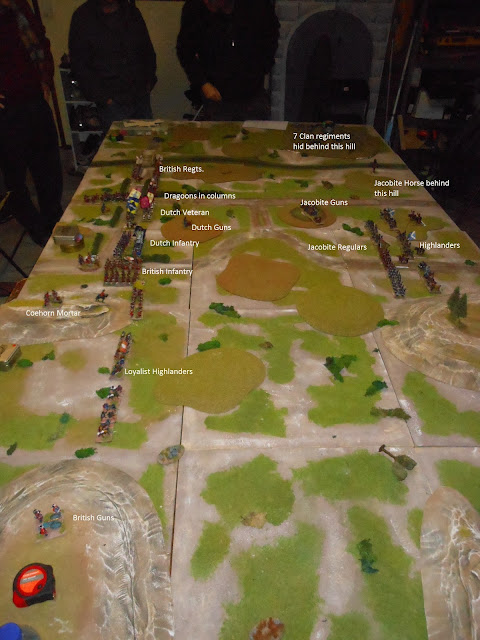 .
Click here to read this entry and see the pics;
Posted by John at June 09, 2012 10 comments:
Email ThisBlogThis!Share to TwitterShare to FacebookShare to Pinterest
Labels: Jacobite Rebellion of the '15, Marlburian

The Aftermath: The Battle of Edinburgh

Well all of Europe was stunned to hear of the victory by  the Duke of Argyll over the Jacobite forces. Stunned because the Jacobite Juggernaut had been gaining a fearsome momentum that threatened to not only toss the Hanoverians out of Scotland but looked like an advance into England could also be on the cards. The French were involved, the Hanoverians were on the back foot and there was some serious factionalism in the High Command of his Britannic Majesty's forces! Now, that said, the combined Dutch/British force pulled off a remarkable victory and King George I's  government managed to produce a diplomatic coup by having the French Government sign an alliance...while French troops were on British soil!!


Click here to read this entry and see the pics;
Posted by John at June 03, 2012 4 comments:
Email ThisBlogThis!Share to TwitterShare to FacebookShare to Pinterest
Labels: Jacobite Rebellion of the '15

My son (Little Nick) has always been a big fan of computer games like Battlefield and Call of Duty Special ops and those sorts of games- principally those with more modern settings. So my journey was on to find something like that for the table top. Last year we went to MOAB, a convention here in Sydney and there was a display game (I can't remember by whom) of the game  Force on Force by Ambush Alley games and published by Osprey. Well he and I played the Vietnam War scenario and we were hooked. We bought a copy of the rules from the War and Peace Games stand and then a whole stack of modern US Marines and Taliban from Nick Robson of Eureka Miniatures. Within a few days we had them painted and ready to go. Since then we've played quite a few games.

Click here to read this entry and see the pics;
Posted by John at June 02, 2012 11 comments:
Email ThisBlogThis!Share to TwitterShare to FacebookShare to Pinterest
Labels: Force on Force, Taliban, US Marines

Latest addition to my Marlburians- The Garde Suisse (Swiss Guard)

As most of the Brothers know, my obsession over the last 6 years has been my War of the Spanish Succession Collection. It has become pretty extensive over that time and we've had some great games- as well as our recent Jacobite Rebellion of the '15 campaign. 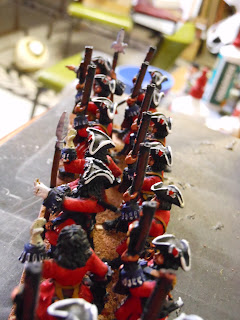