Another Round for the Duke 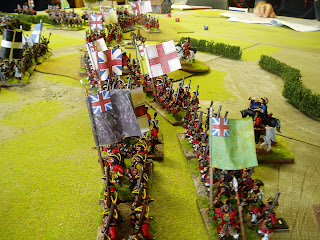 Using the Rank and File rules from Crusader publishing I decided to go 'solo' one afternoon. My son wasn't interest in playing, he had just bought himself a copy of Call of Duty 4 and was glued to the TV and XBox. I, however, decided to play against the easiest and most ineffectual wargames general I know: myself. The scenario was simple, capture a line of low hills and this was done using the Programmed Scenario booklet produced by WRG a few years ago. The Duke of M had two brigades of British Infantry( 3 units each), some Dutch guns and a large brigade (4 units) of Dutch and Prussian cavalry. The troops of the Sun King had, exactly the same with both sides advancing quickly to take the hills. The British, with the superior firepower won the day but a charge by a regiment of French Dragoons (Firmacon) gave the Duke some real headaches as they ploughed through two redcoat battalions. They were seen off by the Dutch Cavalry. Ahh the glory and spectacle!!
Posted by John at November 09, 2009 No comments:
Email ThisBlogThis!Share to TwitterShare to FacebookShare to Pinterest
Labels: War of the Spanish Succesion

Has this ever happened to you? You buy ruleset after ruleset and although some of them play really well, and each one has some great mechanisms not one has the right 'feel'. Over the years we've played a lot of WRG Horse and Musket and for a period of time the Brothers were dedicated Shako fans. But for a variety of reasons these fell by the wayside.
In the last year or two several new sets have been available and the boys have all been willing to give them a shot(pun intended). We tried Beneath the Lilly Banners by the League of Augsburg which weren't too bad. In recent weeks we tried the new offering by the Foundry Napoleon and found the firing, melee and morale rules to be simple and really effective. We had a few strange situations due to the command and control rules, but that could have been my fault through misinterpretation! So we tried again...and got the same strange result. Although they look great and the information in the book is great, I'm not sure if we'd use them as our regular set. We've also tried the Crusader publishing set Rank and File. Now these were a very fast set. Once you start losing more than a stand or two from your units, things go downhill very fast in terms of morale! We used my ACW figures in 25mm and it was a quick, easy game with a result in around 2-3 hours. With 8 players and only one person having read the rules, not a bad effort. Finally, Warlord Games new 'Black Powder' rules arrived in the mail a few days ago. We haven't tried them yet, but when we do I'll keep you posted!
Posted by John at November 09, 2009 No comments: Links to this post
Email ThisBlogThis!Share to TwitterShare to FacebookShare to Pinterest
Newer Posts Older Posts Home
Subscribe to: Posts (Atom)