Well we've all seen '55 Days in Peking' with Charlton Heston and David Niven. There have been some great games replicating the siege of the Allied Legations and I still have the Wargames Illustrated and Miniatures Wargames editions that both had the participation game by the Staines Wargamers. I think those articles are amongst my all time favourites. Well I sold my Indian Mutiny to Chris about a year ago and put it into some Boxers...and some imperial Chinese troops....soon there were Russian infantry, Italian, Austrian and French sailors, US Marines...etc etc....

Click here to read this entry and see the pics;
Posted by John at February 08, 2020 4 comments: Links to this post
Email ThisBlogThis!Share to TwitterShare to FacebookShare to Pinterest
Labels: Boxer Rebellion, The Men Who Would Be Kings.

Some of the brothers assembled for an ACW stoush- the battle of Atlanta July 1864- using the scenario in the old Fire and Fury Western scenario booklet.  We even had Noel join us all the way from South Africa.
In this battle John Bell Hood's Army of Tennessee was trying to break the tightening ring of the Union army approaching Atlanta. He sent Hardee's corp to outflank the Union Army of  The Tennessee of General James B McPherson. Cheatham's corp was to hit the Union line at the same time. Well, that was the plan, but Hardee was held up by the terrain- and some very tough fighting Union soldiers ( under Ross' command) .
Nick played Hardee with Noel, Chris and Paul as his subordinates. Cheatham's command was also ( when it finally arrived) played by Paul and Chris.  Ross was McPherson, Richard and Phil commanded Dodge's and Logan's Corps.

The game went very much as per the historical battle. Hardee's corp hit the Union flank hard, but didn't completely get around behind - so two of the encircling Confederate divisions hit the Union entrenchments and had great difficulty in dislodging the Union defenders. Two others got behind but were held up by several union brigades redeployed from the main line. In the end the Reb losses were very heavy and Hood called it a day!


Click here to read this entry and see the pics;
Posted by John at January 18, 2020 4 comments: Links to this post
Email ThisBlogThis!Share to TwitterShare to FacebookShare to Pinterest
Labels: ACW

Thracians vs Hellenistic Greeks- A fight and rematch.

Ross was impressed with his new Thracian army. So months ago he invited me over to admire the paint job- and get my butt kicked by his new army.
Thracians? Ptooi. ( That's a spitting sound to the uninitiated.)
Now I do know my ancient literature. Herodotus had claimed that the Thracians were amongst the fiercest warriors in the world and could have conquered everyone- but they were too busy fighting each other.
Okay- so what? - this was 2019. And besides Ross is a sh*tty general. My Greeks were going to teach these northern barbarians a lesson.

The report below was found by archaeologists digging in central Greece, just last week in fact. It was the despatch of an Achaean League general, Crapistos, a well known general, who went missing shortly after this engagement.  Strangely enough, it seems to follow the course of the battle that I fought with Ross. 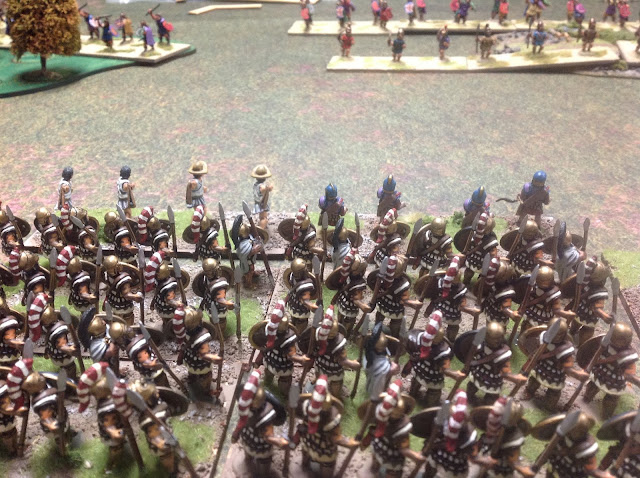 Click here to read this entry and see the pics;
Posted by John at October 22, 2019 No comments: Links to this post
Email ThisBlogThis!Share to TwitterShare to FacebookShare to Pinterest
Labels: Ancients, Greeks, Thracians

Trouble on the Frontier again

Nick, Evan and James were fascinated by the Indigenous Warriors I had sitting on my shelf.
They demanded a game! So, being a congenial and willing host- the table was set up, the scenario was explained- and we had a good little game!


Click here to read this entry and see the pics;
Posted by John at October 11, 2019 No comments: Links to this post
Email ThisBlogThis!Share to TwitterShare to FacebookShare to Pinterest
Labels: Frontier Wars


Click here to read this entry and see the pics;
Posted by John at March 02, 2019 4 comments: Links to this post
Email ThisBlogThis!Share to TwitterShare to FacebookShare to Pinterest
Labels: Republican Romans, Seleucids

Inspired by 'A Grab Bag of Games' Blog  and 'Mac's Little Friends'  (see down the right hand side) I couldn't resist a game that represented historically what happened in my own back yard- So I bought some figures, made the terrain- bought some trees and hey presto- a nice little game!! 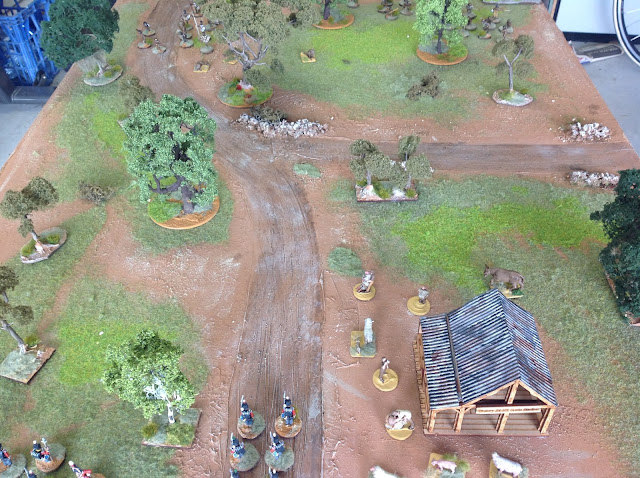 My solo effort was meant to give the rules a dry run- a group of warriors ( Just over 30) were hunting- and found a shearing shed and group on their traditional lands- a dozen or so Redcoats were in the area- they had to be - it wouldn't be much of a game if they weren't!
Click here to read this entry and see the pics;
Posted by John at February 16, 2019 12 comments: Links to this post
Email ThisBlogThis!Share to TwitterShare to FacebookShare to Pinterest
Labels: Frontier Wars

While the main focus of the war shifted south, the commander of the British Army in New York was under pressure to do something rather than watch the Continentals across the river in the Jerseys.

Our game represents the result of that pressure when Knyphausen crossed the Rahway River near the town of Springfield in June of 1780.


Click here to read this entry and see the pics;
Posted by John at February 03, 2019 6 comments: Links to this post
Email ThisBlogThis!Share to TwitterShare to FacebookShare to Pinterest
Labels: American forces AWI, AWI, British Troops AWI


.
This battle was one of the major actions undertaken by the Australian Task force during the Vietnam War. On the 6th June 1969, D Company 5 RAR commanded by Major Murray Blake, was called out with a troop of Centurions and APCs as part of 1ATF Ready Reaction Force in response to enemy activity in the village of Binh Ba to the north of the Australian base at Nui Dat. Binh Ba had been occupied by Vietnamese forces ( 33NVA Regiment and D440 Battalion) and had to be removed.
For more pictures see 'No Duff Gamer' Blog down the right hand side.

Click here to read this entry and see the pics;
Posted by John at January 16, 2019 12 comments: Links to this post
Email ThisBlogThis!Share to TwitterShare to FacebookShare to Pinterest
Labels: Modern Bolt Action, Vietnam War

ECW- Montrose, the Irish and the Covenanters.


Now all these Highlanders could also be put to use from just about any period from the 1600's to 1746, so I started ticking off in my mind what I could use them for- and had an idea after reading Trevor Royle's book: Civil War, The Wars of the Three Kingdoms  and decided on one word- Montrose!! 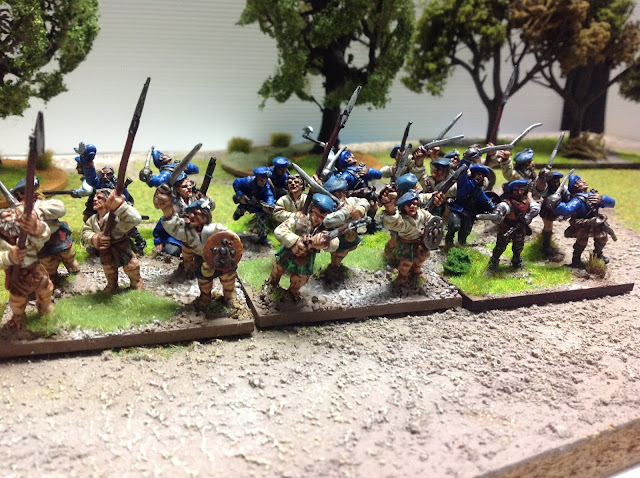 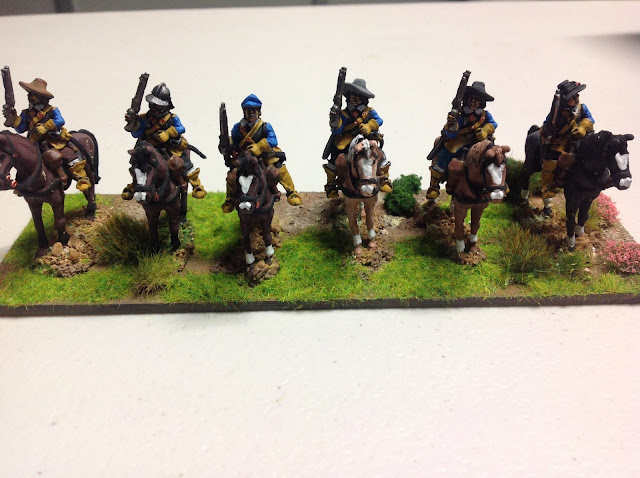 Click here to read this entry and see the pics;
Posted by John at January 09, 2019 2 comments: Links to this post
Email ThisBlogThis!Share to TwitterShare to FacebookShare to Pinterest
Labels: ECW, Montrose, Tercios