I had a few nights when the heat was so bad I couldn't sleep, so out came the paints and more teddy bear fur at 2am- just ridiculous.  I know, it's nuts but I've become a bit obsessive with regards to new look ideas for terrain.
After I finished, I got some sleep and then later in the day, set up some figures from my AWI collection. I pulled out my forces for Cowpens and placed them on the mat. I kinda like the effect.  It's a game I'm going to have to play!! 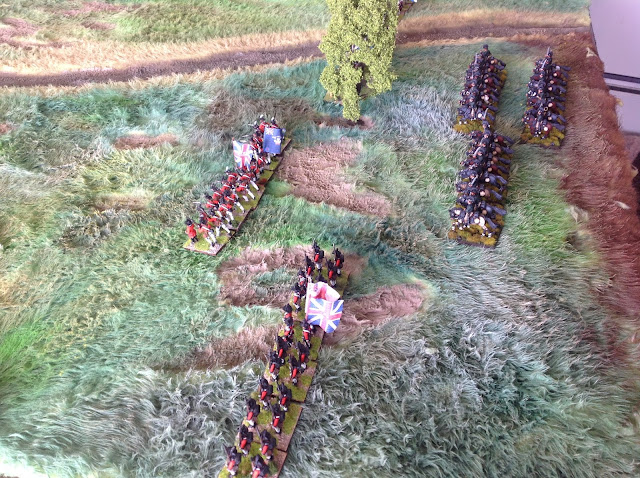 Click here to read this entry and see the pics;
Posted by John at January 22, 2018 4 comments: Links to this post
Email ThisBlogThis!Share to TwitterShare to FacebookShare to Pinterest
Labels: AWI, Terrain

The table was ready, the troops were prepared and it was 'go!' The objective was simple, the combined Australian/US Marine force was to take the two islands. The Japanese just had to survive.
The allies decided to assault only Red Beach ( Red 1, 2 and 3) rather than hit the main island from both sides. This had its pros and cons as it meant that the Japanese who had Green beach covered- several machine guns, mortars and rifle squads- were now facing empty beaches and had to be redeployed. For the allies, they spread themselves across the three beaches, with no critical concentration of force so they found that they did need more troops by mid-game.


Click here to read this entry and see the pics;
Posted by John at January 12, 2018 10 comments: Links to this post
Email ThisBlogThis!Share to TwitterShare to FacebookShare to Pinterest
Labels: 2nd AIF, Australians, Bolt Action, Japanese Imperial Army, US Marines

Don't be put off by the title- I've got this idea from lots of other blogs ( not least Jay's Wargaming- see down the right hand side.- and he does a brilliant job)  So I thought I'd give this a try- just a small piece to try the techniques. In the end the final piece still needs a little more work- but I don't think it turned out too bad...and it was much faster than my Pacific Island terrain! ( and about 1/4 the size!)

See for yourself. I added a few figures to see the effect.

Click here to read this entry and see the pics;
Posted by John at January 08, 2018 4 comments: Links to this post
Email ThisBlogThis!Share to TwitterShare to FacebookShare to Pinterest
Labels: Terrain
Newer Posts Older Posts Home
Subscribe to: Posts (Atom)