War of the Roses Clash

About eight weeks ago, late one cold and stormy Friday night, Paul's Lancastrians made the long march to my garage to challenge my freshly painted Yorkists. Now my Spanish had suffered a savaging at the hands of these Lancastrians and their damned English longbow! That was last year. It's taken me the best part of a year to get the Yorkists ready. So the challenge was on- and uniquely both armies had exactly the same composition. Why? Well why not? Totals: 9 units of longbow, three dismounted Men At Arms, three bill-men, one artillery piece and four units of knights.  I'm very sure that it is very rare that two wargames armies are not only exact in points but in composition as well!! Predictability in wargames??? No way!

Deployment could have been a problem if our forces had mirrored each other- well they kind of did- long bow in the middle- backed up by billmen and/or men at arms, both armies had cavalry on their LEFT flanks, and a couple of bow and infantry units on their right. So much for originality!! I couldn't even think of anything more to say before we started other than:
"Now is the winter of our discontent, Made glorious by this sun of York, and all the clouds...."
I was shouted down and told to shut the f**k up and roll the dice to see who would move first.
Thanks guys- again my acting genius goes unnoticed.....again.


Anyway this was going to be a bloody one as the longbow opened up on both sides, blocking out the sun ( where have I heard that before?) and more of Paul's arrows found their mark than mine did.
Turn two: More arrows.
Turn three: Even more arrows.
Turn four- I hate these goddamn f**king arrows.
Turn five: My pin cushions got into contact.
Turn six. Paul's pin cushions got into contact,
Turn seven: All those in contact either won or lost. The survivors got shot by more arrows.
Turn eight: Paul shot the last of my men.  My army broke. I didn't have much to pack up as they were all pin cushions.
A very interesting game- I had thought that all those longbow would neutralise each other- they did. And every one else too.
What I did learn- and it should be obvious to anyone who knows anything about military history- was that concentration of firepower is very important! Paul did that with his Longbow- keeping them together and concentrating his fire- I had mine spread out across the battlefield in groups of two or three. A lesson for next time!
. 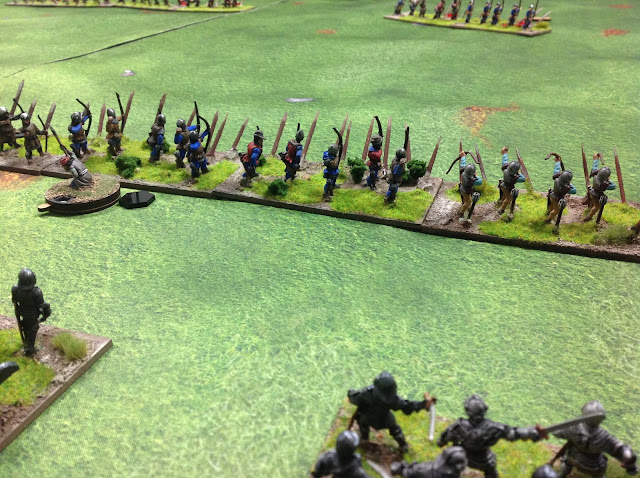 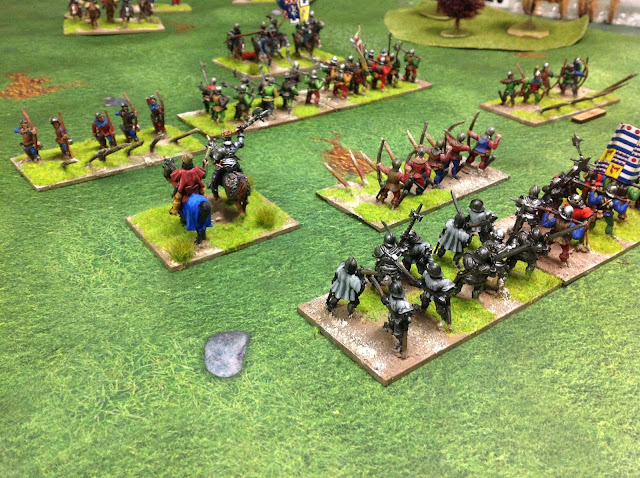 Posted by John at October 06, 2018
Email ThisBlogThis!Share to TwitterShare to FacebookShare to Pinterest
Labels: Lancastrians, War of the Roses, Yorkists.