Force on Force: War on Drugs- Special forces strike on Cartel base

Evan, Nick, Connor and James wanted a game of Force and Force as they sat in the garage, waxing lyrical about the games from long ago.  So Spyros said- I've got the armed civilians and the special forces team, a couple of planes and other bits- do you have any terrain?
I rummaged around and found some bits and pieces and behold we were ready to go.

SITUATION: The US President, after solving the Middle East, the problems in Africa, the coronavirus problem and the Pepsi vs Coke war decided to deal with the major social issue confronting the nation- The War on Drugs.

The President's new directive is to take the War to the Cartel's doorstep- no matter where they are.
A strike force was put together and given the capability to strike anywhere in the world.

A Force on Force game was played out with 9 Elite SEALS hitting an unnamed drug production facility deep in the jungles of South America.
The SEALS had placed demolition charges on two aircraft and the massive fuel dump when a fire fight erupted between Cartel gunmen and the SEALS. Several gunmen were killed as more arrived on the scene.

The superior training and motivation of the SEALS was the key factor in them dominating any opposition. Some well placed bribes before hand, even saw gunmen change sides ( or a FOG of WAR card) and it was looking like the SEALS were going to destroy the whole facility when they received further orders. Intelligence revealed, through the location of his mobile phone, that the head of the Cartel, was in fact on site. Mission parameters were changed and the Teams conferred to radically alter the details of their planning. The High Value Target was far too important to ignore...and this proved the undoing of the SEAL Teams.


Changing the direction of their assault, the teams headed after the HVT, but this meant moving further into the Area of Operations- something they had not prepared for.  This change in objective was fully supported by the turncoat gunmen who were happy to hunt for the Cartel leader, until they stepped on an old hidden mine ( another Fog of War card) and they didn't do much after!!


The Real tragedy for the SEAL teams was the fact that Bravo team got caught in a crossfire, leaving one dead and one severely wounded. At that point some Cartel Heavies got a heavy machine gun deployed, on the back of a ute (another FOG of WAR card) and Alpha team took a hit. A third of the seals were down, and even the appearance of an unmanned drone taking out a nest of gunmen didn't help as another SEAL was hit by gunfire from the Sicario barracks.

With four casualties and under fire from different directions, the SEALS withdrew to their original Point of Entry, rather than the planned for Point of Extraction and left the airfield a smouldering ruin- but the plantation in tact- not the hoped for outcome!


NEWS FLASH- PRESS CONFERENCE FROM THE WHITE HOUSE.
The President's new aggressive policy has seen some great success in the first mission. Two valuable aircraft were destroyed, enormous amounts of fuel were destroyed and many of the Cartel's gunmen were neutralised. Additionally the head of the Cartel is on the run.  A great success! 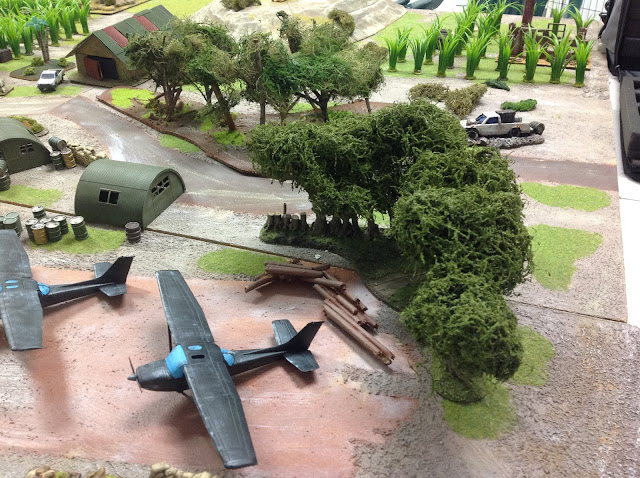 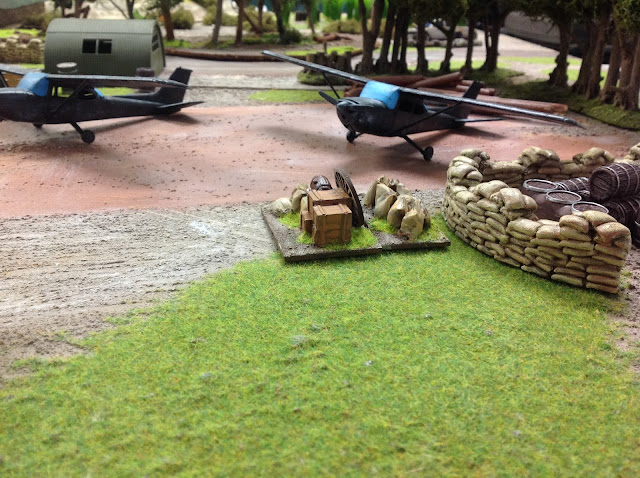 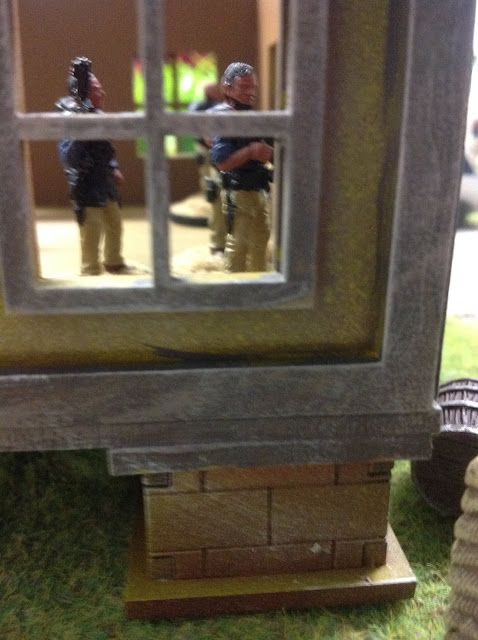 Posted by John at March 08, 2020
Email ThisBlogThis!Share to TwitterShare to FacebookShare to Pinterest
Labels: Force on Force, SEALS